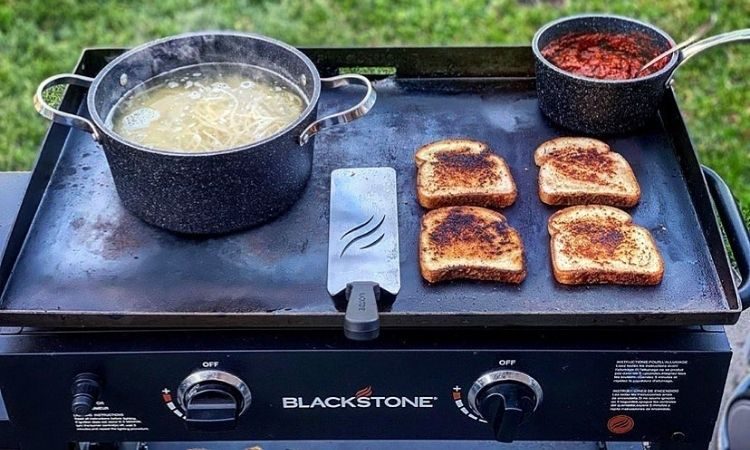 Can You Boil Water on a Blackstone Griddle?

Outdoor propane griddles are becoming more popular because they are versatile and easy to use. Just hit the ignition button and in a few minutes you are ready to cook anything from fried eggs and pancakes to steaks and burgers.

But what if you want to boil some water for pasta, rice, or potatoes? Can you do it right there on the griddle?

Or do you have to run indoors and boil the water on a stovetop?

The good news is, that you can definitely boil the water on the griddle. But I recommend you read this guide first and make sure to do things the right way.

You don’t want to wait for an hour for the water to boil or end up with a warped griddle surface.

Blackstone makes some of the best flat top grills on the market and their versatile units can be used with cast iron and stainless steel pots and skillets.

So when you have a large Blackstone griddle, you can cook everything on it at the same time. Sear those steaks while you cook baked beans on a cast iron skillet and boil water for rice, there are no limits!

How to Boil Water on a Griddle?

Boiling water on a propane griddle is really easy. Just put water on a pot, place it on the griddle and wait until it boils, right?

There are a few important things to consider before you get to it.

First, there are two different ways to boil water on an outdoor griddle:

The better option is the latter one — remove the griddle top so you can put the pot straight above the burner flame. It’s faster and more efficient since the heat goes directly to the bottom of the pot and there is no griddle surface in between.

The thing with Blackstone flat top grills is that you can’t easily remove the griddle top, so the only option is to put the pot on top of the griddle surface.

However, most Camp Chef outdoor griddles have removable griddle tops. This is one of the main differences when comparing Camp Chef vs Blackstone griddles.

Instruction for Boiling Water on a Blackstone Griddle

Here is how to boil water on a Blackstone griddle:

While this is a fairly simple process, it’s not a very efficient way of boiling water because you need to heat the griddle surface first.

There are also some things to look out for. You don’t want to use the wrong kind of pot for boiling the water. Read more about this below.

Can I Boil Water on a Griddle With a Regular Pot?

The most important thing is to make sure that the pot you are using can withstand the heat from the griddle. Regular saucepans and pots intended for stovetops should be fine.

Then there is the matter of heat conduction.

If the heat is not efficiently conducted from the griddle top to the pan and from there to the water, you will end up waiting for a long time and spending a lot of propane for boiling just a few cups of water.

To make matter worse, if you keep the full heat on for too long, you can end up warping the flat top grill.

There are three important things to consider:

Do you know those cheap pots and pans that feel very light and often have a thin and uneven bottom?

They are usually made of aluminum and cost only a few dollars.

Don’t use them for boiling water on your griddle!

The problem is that since the bottom is thin and uneven it can’t properly receive the heat from the griddle surface. This means that you will probably end up burning out all your propane or warping the griddle before the water boils.

Otherwise, any sturdy regular metal pot should be fine for boiling water. But if you have a lot of water it might take a while.

However, cast iron and stainless steel cookware are usually of better quality with thick and even bottom. Also, stainless steel pans often have an aluminum layer inside the bottom for better thermal conduction and cooking performance.

What Kind of Pot to Use When Boiling Water on a Flat Top Grill?

My recommendation is to use a high-quality stainless steel pot or a cast iron pot or a skillet when boiling water on a flat top grill.

Or why not use a stovetop-safe tea kettle?

The important thing is to avoid using any cookware that can’t withstand high heat or has a warped or otherwise uneven bottom.

5 Tips for Boiling Water on an Outdoor Griddle

Ok, so now you know that you can indeed boil water on your outdoor griddle. This is great because it makes your flat top grill even more versatile.

It means that there is no need to go inside and boil water on a stovetop. Or if you are on a camping trip, you don’t have to bring a separate gas stove with you.

Before you boil water on a griddle, just remember to follow these tips:

And it’s not just flat top grills that you can use for boiling water, you can basically boil water on any kind of grill.

Remember that boiling water on a flat top grill is not the most efficient way and it might take a while. Also, if you are not sure that your pot is suitable for the purpose, don’t risk it!

PS. You might also be interested in reading this article with an epic battle of Pit Boss vs Blackstone griddles. 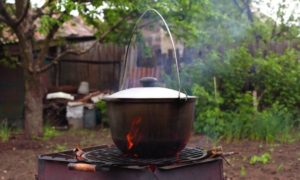 Can You Boil Water on a Grill? Here is How to Do It! 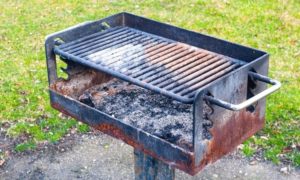 Can You Cook on Rusty Grill Grates – Is it Safe?